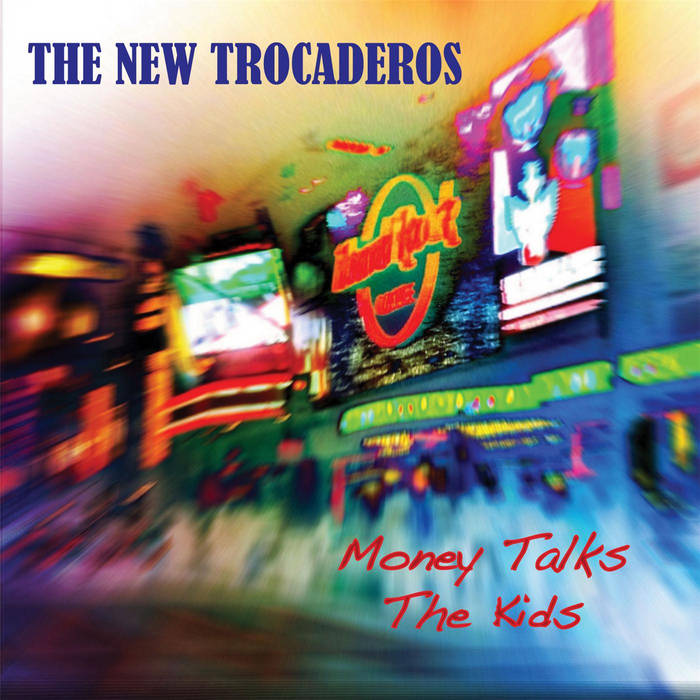 "The Kids" was named "The Coolest Song in the World" by Little Steven Van Zandt at the Underground Garage (SiriusXM, channel 21) on March 4, 2014, and went into heavy rotation at the station. "Money Talks" was added to the Underground Garage's playlist about 6 weeks later and as of April 23, both songs are still played regularly. Thank you Steven.
Here's LIttle Steven's chuckle-filled rap about "The Kids." www.youtube.com/watch?v=Fy0ls8x_TEc

The New Trocaderos (is) an alliance between Kurt Baker, and Brad Marino and Geoff Palmer from The Connection. Well shit, you can’t beat that if you love rock ‘n’ roll!

“Money Talks” is not a cover of The Kinks song on Preservation Act 2, but a high-flying butt kicker. It opens perfectly with pounding drums opening the way for ripping lead guitar from Brad that gets you in the mood faster than the sound of a D-cup bra snap. According to the notes on the site, Brad Marino plays drums and Kurt Baker bass, and ladies and gentlemen, these guys know what a rhythm section is supposed to do with a rock song—treat it like a woman wants to be treated! Drive it hard and don’t stop! The middle section where Geoff delivers a spine-tingling solo before the band backs off and lets the bass and drums take over for a few bars is to die for. And better yet, the story line is a hoot! Woman wants money. Man’s got no job. Dumb ass robs a store. Well, what did you expect, honey?

And I have to say that the key line, “The money key opens every lock,” is good enough to qualify as iconic . . . I just wish it weren’t true.

Befitting Kurt Baker’s talents, “The Kids” is a more melodic rocker with plenty of hand-clapping energy and a delightfully singable chorus of “It goes Oh-oh-oh-oh-oh.” The vocals are the highlight, both Kurt’s hold-nothing-back lead vocal and the call-and-response with the background singers. “The Kids” is all about the joy of good old rock ‘n’ roll blasting on the radio, a trend I desperately wish would return to the present day. People! Rock ‘n’ roll makes us happy! Rap and Hip Hop make us narcissistic assholes! Save the human race! Rock the fuck out!
altrockchick.com/2014/01/13/shameless-plugs-and-etymological-passion/

Talk about a dream team! The New Trocaderos are Brad Marino and Geoff Palmer from The Connection plus the great Kurt Baker doing power poppin' rock n' roll. That's three of my favorite guys in today's rock scene, playing the kind of music that's nearest and dearest to my heart. They've joined forces on this project to record two all-new songs written and produced by their good friend Michael Chaney. If at this point you'd prefer to stop reading and just go listen to the single, I wouldn't blame you! Knowing who's involved here, you don't need me to tell you it's good!

Marino handles lead vocals on "Money Talks", a revved-up golden oldies rocker with hot guitar licks, a knockout sing-along chorus, and harmonies out the wazoo. Not surprisingly, it sounds like it could be a Connection song (and a good one at that!). In the grand tradition of rhythm & blues and early rock n' roll, the lyrics tell a story - one that's as relatable now as it would have been decades ago. Ahhh, the things a man will do for the love of a woman...

With Baker on lead vocals, "The Kids" is exactly the kind of rockin' pop anthem you'd expect. I'm really moved by Chaney's lyrics - which celebrate the salvation rock n' roll music can be for a young person growing up in this world and struggling to make sense of it all. It's essentially a love letter to all the musical greats who have given us all those good times and kept us sane through the bad times. And since it's a pet peeve of mine when songs about rock n' roll kind of suck, it's so great to hear a song like this that genuinely epitomizes what the lyrics are conveying. This is the kind of tune that would have been playing at full blast while you were out with your friends on one of those magical Friday nights of your youth- rocking your worries away and living for the moment. And because of the timeless sound of The New Trocaderos, you'll relate no matter what your age.

What I really dig about this single is that it recalls a time in rock n' roll when the individuals who produced records were artists in their own right - and there was no shame in finding incredibly talented people to perform the music you wrote. I really hope that this is not the last we hear of The New Trocaderos. I love the concept, and more importantly I love the songs! CD pressing is extremely limited, so hop to it!
fasterandlouderblog.blogspot.com/2014/01/introducing-new-trocaderos.html

The New Trocaderos. This is a two-sided single from Brad Marino and Geoff Palmer of The Connection (which released the No. 14 song on my year-end list of the 20 best songs of 2013), and Kurt Baker. There is nothing fancy at all here. It’s just good old-fashioned rock and roll done flawlessly.

The lead track, “Money Talks” is about as old school as they come, with its Chuck Berry-style lead guitar over a basic rock rhythm and blues structure bolstered by perfectly placed harmonies. “Well money talk and boo–she–waw,” Marino sings a couple of times in this tale of love lost to the guy with the much bigger bank account. Words to live by.

Baker takes lead vocal on “The Kids,” a thematic update on the MC5′s “Shakin’ Street” set amid a tight and shiny New Wave/Power Pop groove ripped from the late-70s. “The Kids” is a paean to the potentially transcendent power of rock and roll. No matter how bad things can get growing up in a seemingly nowhere place, there’s always the music to lead the way: “Sometimes my parents take my records away/But that don’t matter, they’re all in my head/Playing all night and all day, yeah.” Yes, indeed. popthatgoescrunch.com

The New Trocaderos are Brad Marino and Geoff Palmer from The Connection and fellow power popper Kurt Baker in a wild collaboration with songwriter/producer Michael Chaney. “Money Talks” is straight from the Connection template of fast tempos, solid guitar riffs and harmonies all the way through. “The Kids” is sung by Baker and comes closer to the Ramones/Elvis Costello style. Either way this is a really nice EP and great way to start the year. Any chance a full LP will be on its way? www.powerpopaholic.com

"They rock. They pop. They sparkle like the hits they are! I'm adding both to the Pure Pop Radio playlist." Alan Haber PurePopRadio.com

The New Trocaderos are Brad Marino and Geoff Palmer, the driving force behind THE CONNECTION--collectors of 4 Coolest Songs in the World at Little Steven's Underground Garage--and Kurt Baker of the KURT BAKER BAND, himself the recipient of 2 Coolest Song in the World awards.

Marino-Palmer-Baker, prominent veteran power pop rockers (The Leftovers, The Guts, The Queers, The Rydells), are multi-instrumentalists destined for greatness. They came together for this special NEW TROCADEROS project to do a solid for a friend...and kicked ass in the process.

To hear a lot more from these 'best of their generation' singer/songwriters, check out:

"Hey, baby...It's Troc time." Brad Marino
"McCartney wanted me in his band, but I joined The Trocs instead."
Geoff Palmer
"Troc me, baby. Troc me all night long." Kurt Baker

The NEW TROCADEROS are Brad Marino and Geoff Palmer, the driving force behind THE CONNECTION--collectors of 7 Coolest Songs in the World at Little Steven's Underground Garage--Kurt Baker of the KURT BAKER BAND, himself honored with 5 Coolest Song awards, Kris "Fingers" Rodgers, one Coolest Song, and Rick Orcutt on drums.

Bandcamp Daily  your guide to the world of Bandcamp

Featured sounds from Fly Lo and Ahmed Idris, plus Mother Nature hops on to drop off new project