"Kick Your Ass" on CD 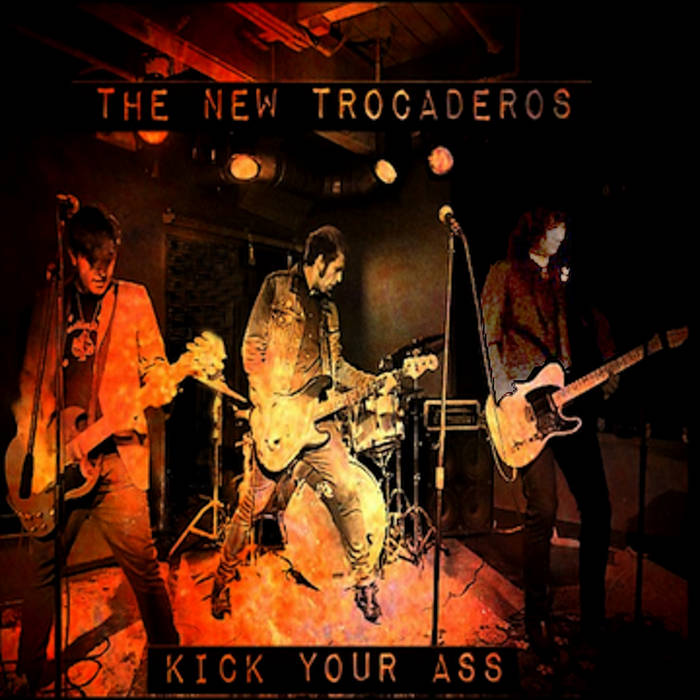 "Kick Your Ass" featuring 'Dream Girl,' the Coolest Song in the World at Little Steven's Underground Garage, Sirius XM channel 21 the week of January 4, 2015, comes in a full-color, shrink-wrapped sleeve. On the front, the band on stage doing 'Money Talks' at its premiere live performance at Bayside Bowl in Portland, Maine on 9/20/14. On the back, band images from the studio. On the CD itself, a shot from Wild Arctic's garden of mutant sunflowers. (Click on each image above)

THE NEW TROCADEROS – KICK YOUR ASS

The New Trocs are sort of a mini-supergroup that includes Brad Marino and Geoff Palmer from the Connection and the always reliable power popper Kurt Baker. Kick Your Ass is certainly an apt title for this three-song teaser; imagine a louder version of mid-‘70s Dave Edmunds all hopped up on stimulants, and you’ll be in the ballpark. Baker sings lead on “Real Gone Kitty,” a classic-sounding rump-shakin’ rocker; “Dream Girl” sounds like the Hollies hanging with the Beach Boys in Phil Spector’s garage with the amps cranked to 11; and “Brain Gone Dead” is 1:30 of Ramonsey perfection. These guys also released a CD single last year which is sublime as well. More, please! Grade: A

EP of the Year:

The New Trocaderos - Kick Your Ass
When Geoff and Brad from The Connection got together with Kurt Baker last year to record a couple songs penned by their friend Michael Chaney, The New Trocaderos proved to be every bit the super group I hoped they'd be. They returned this year with Craig Sala on drums and Kris "Fingers" Rodgers on keyboards and delivered an EP so good that it even beat out that awesome Lovesores 10" for this award. If you enjoy power pop and traditional rock n' roll, The New Trocaderos ought to be your new favorite band!
fasterandlouderblog.blogspot.com/2014/12/the-lord-rutledge-awards-2014.html?m=1

Some of the best rock n’ roll songs produced by human hands; exciting, exhilarating, exceptional: all understatements when describing this record!
audioammunition.blogspot.com/2014/12/2014-top-ten-lists.html


The AltRockChick - The New Trocaderos: Kick Your Ass

An exciting new release from some of the few guys left who know how to play rock ‘n’ roll, Kick Your Ass is a three-song teaser set by The New Trocaderos, a made-in-heaven alliance of Kurt Baker and The Connection’s Brad Marino and Geoff Palmer. I broke my rules last year to review their single “Money Talks”/”The Kids” and I’m breaking my rules again for an all-too-rare-these-days burst of powerhouse rock ‘n’ roll.

“Real Gone Kitty” opens the set with a stop-time slam that tells you right up front these guys mean business. This one has a “Power Fifties” feel with references to kids boppin’ at the high school hop, but the power of the band will erase any thoughts from your mind that this is some kind of novelty number: this is no-bullshit rock ‘n’ roll played with furious energy. Some solid guitar work is enhanced by a very clever use of panning and Kris “Fingers” Rodgers is very slick on the 88’s. Kurt Baker’s lead vocal is full of power and grit, and if you can’t get off on this one, there’s no hope for you, my friend.

Geoff Palmer moves into the lead singer slot for “Dream Girl,” a melodic-harmonic rocker with a “Look Through Any Window” kind of riff and Hollies-like harmonies, but with much stronger bass and guitar power than your typically trebly mid-60’s British Invasion track. Geoff’s voice works well with this song, giving it an earnest innocence that fits the role of the yearning lover. Sandwiched between two drivers, its melodic and harmonic flow gives the set a nice change of pace.

Pounding drums open “Brain Gone Dead,” where Brad Marino gets his turn, a pumping rocker about the stupidity of overindulgence in drugs and alcohol. Though the imagery is semi-tragic, I had to laugh at the opening verse: “Take ten reds/Go to gin/No-ti-fy/Next of kin.” Well, what the fuck did you expect, dummy? The music is ironically cheerful, and though the sound is very different, the sly black humor echoes The Ramones. Brad Marino is one of my favorite lead singers, and he snaps off this vocal with command. The band is on fire, and the instrumental passage where the organ solo leads to a stop-time guitar chord bash is a hoot! This is why I hate reviewing EP’s as much as I hate getting a quickie. I want more! More! More!

You can pick up a copy at Bandcamp, and while you’re there, stock up on New Trocaderos, Kurt Baker and The Connection releases (the links are all there for you, sweetie). I guarantee you will NOT be disappointed!


<< Faster and Louder - The world according to Lord Rutledge

Check it out! It's not even November yet, and I'm already making a final call on EP of the Year. You can start carving the trophy. As far as I'm concerned, The New Trocaderos have got it locked up! I first proclaimed this band's greatness on the second day of this year - and my big hope was that this would be more than just a one-off project. Well, to my utter delight, this super-group is back with a second helping of rock n' roll/pop/garage goodness that ought to have the entire world dancing and singing along! The New Trocaderos are Brad Marino and Geoff Palmer of the almighty Connection along with the king of power pop, Kurt Baker. Once again, these three have collaborated with L.A. songwriter Michael Chaney - and they've somehow managed to top their sensational debut single "Money Talks"/"The Kids" (a fixture this year on Little Steven's Underground Garage).

The new record is called Kick Your Ass, and it builds off the energy of "Money Talks" without coming off like a carbon copy. This time around, all three New Trocaderos take turns singing lead. And each track has its own distinct feel. Kurt's up first with "Real Gone Kitty" - a high energy shaker in the style of late '50s rockabilly and rock n' roll. Like The New Trocaderos have been known to do, here they acknowledge influences (Carl Perkins, Jerry Lee Lewis) and lyrical themes from rock n' roll's golden age yet find ways to make them sound fresh for a contemporary audience. The red-hot piano work of Kris "Fingers" Rodgers would probably bring The Killer himself to tears of joy, and all in all this song joyfully celebrates youth, fun, and the endless pursuit of pretty girls. Again and again, I'm implored to stop whatever I'm doing and start dancing around like a maniac. I am now banned from taking headphones into Whole Foods.

Next up, Geoff sings "Dream Girl" - a gorgeous '60s pop jangler a la Beatles/Beach Boys/Byrds. Again, it's a fresh take on a classic style - with melodies to die for and a vocal treatment that brings to mind a young Nick Lowe. I will warn you in advance that getting this song unstuck from your head may require professional help of some sort. Oh my god, that bridge! Those harmonies and handclaps really hit the spot, and let's hear it for the lost art of the fade-out ending! This is just perfect pop - and a major step forward for this band in terms of production and musical sophistication.

To close out the EP, Brad takes the mic on "Brain Gone Dead". This is about as flawless of a Ramones homage as you could ever hope to hear - replete with morbid nursery rhyme lyrics you won't be able to resist repeating. There's a neat little guitar hook in there that adds a lot to the song - the kind of minor detail that can separate a great band from a not-so-great band. With Brad's distinct vocal style, of course you're going to be reminded a little of The Connection. But what I like about The New Trocaderos is that these three guys all show something a little different when they record under this name. It's not like someone just put a solo Kurt Baker song and a couple of Connection tunes onto a record and passed it off as a new group. Chaney, essentially the fourth New Trocadero, has found the perfect musicians to bring his creative vision to life. Here you have three equally good singers - each with a keen ear for pop craftsmanship and timeless rock n' roll melodies. And the addition of "session" players Rodgers and drummer Craig Sala (Kurt Baker Group) has only made the band better!

What I love about this record is that I'm completely unable to pick a favorite track. There's not one hit here but rather three of them - each one taking inspiration from a different period of rock n' roll that I personally hold dear. Of course The New Trocaderos "borrow" from all the right influences. But just as importantly, they do their heroes proud by crafting songs good enough to hold up in any era. And that, more than anything else, is the mark of great rock n' roll. >>

The New Trocaderos, Kick Your Ass: The New Trocaderos are a mini-Supergroup consisting of Brad Marino and Geoff Palmer of The Connection and Kurt Baker, perennial favorites of this site. My review of the band’s double-sided single released in late-2013 can be found here. They’ve returned with three new songs co-written by pal Michael Chaney. True to its title, this one gives you a swift and powerful kick to the backside, or rather several swift and powerful kicks to the backside.

Baker gets the festivities started with “Real Gone Kitty,” and takes you back to the days when Jerry Lee Lewis was boppin’ at the high school hop and Joey Dee was doin’ the Peppermint Twist. The guitars scream like banshees on this one, and the piano keys fly by at a mile a minute thanks some nifty vintage playing by Kris “Fingers” Rodgers. You won’t be able to sit still while this one is on. In fact, you quite likely will need to take a breather and get some water after working your way through this two-minute-and-change romp:

Palmer takes over lead vox on “Dream Girl,” which you will swear was a big hit back in the summer of ’65 with its pretty jangling guitars and equally gorgeous harmonizing. Personal experience says it will be ringing around in your head the moment you wake up in the morning:

Marino grabs lead vocals on “Brain Gone Dead,” the most “modern” of the three songs with its Ramones-like vibe straight out of 1976. This one is quite a bopper. It runs a whole minute-and-a-half, and sports lyrics like “Take ten reds/Quart of gin/Notify/Next of kin.” It’s Jim Carroll’s “People Who Died,” stripped to its essence:

Get Kick Your Ass.

Each New Trocadero -- Kurt Baker, Brad Marino, and Geoff Palmer -- sings lead on a tune on this brand new EP, "Kick Your Ass."

The NEW TROCADEROS are Brad Marino and Geoff Palmer, the driving force behind THE CONNECTION--collectors of 7 Coolest Songs in the World at Little Steven's Underground Garage--Kurt Baker of the KURT BAKER BAND, himself honored with 5 Coolest Song awards, Kris "Fingers" Rodgers, one Coolest Song, and Rick Orcutt on drums.

Bandcamp Daily  your guide to the world of Bandcamp

Featured sounds from Fly Lo and Ahmed Idris, plus Mother Nature hops on to drop off new project